A quick guide to steel; read about what it is, its history, the different types of steel, and the many uses it has in creating our world.

Everything you wanted to know about steel

This quick guide to steel is everything you ever wanted to know about steel.

Steel is an alloy of Iron and Carbon, with some other ingredients added for various properties. Although not exactly cheap, steel is non-the-less relatively cheap for what it is. This value for money makes steel ideal for various uses and industries; construction of buildings, cars, machines, ships, and machines, amongst others. And because it is used for tools and machines, other objects are manufactured from machines and tools made from steel.

For instance, the phone, tablet or laptop you are viewing this article on will more than likely have been produced by machines made completely or partially from steel.  Read our guide to steel below and become an expert.

Guide to steel, and what it is?

Steel is an alloy of iron, with a carbon content that can range from 0.03% right up to 1,075% of its composition, depending on its grade.

Though steel is primarily made from iron, it should not be confused with iron. Iron is a metal relatively hard and tough, with the atomic diameter (dA), 2.48 Å and a melting point of 2795 ° F and boiling point 4964 ° F.

Steel retains the metal characteristics of iron in its purest form, but the addition of carbon and other elements either metallic or non-metallic improves its physical-chemical properties, especially its resistance.

There are many types of steel according to the content of alloying elements. Each type of steel will allow different uses and applications, making it a versatile and widely used material in modern life.

The two main components of steel are abundant in nature: Steel can be recycled indefinitely without losing its properties. Because of these properties steel is ideal for large-scale production. The variety of products produced using steel directly are amazing.

It could be said that civilization, certainly the 21st Century, exists for a large part because of steel.

Iron, the main ingredient or steel is found in the Earth’s crust as an ore, usually Iron Oxide; Hematite and Magnetite. Iron is extracted from the iron ore by removing Oxygen through the use of carbon and the carbon is lost to the atmosphere as carbon dioxide. This process is known as smelting, a process first used for lower melting points such as copper and tin.

Other materials are added to the iron/carbon mixture to produce steel which has different properties. For example, adding Nickle and Manganese to steel adds to its tensile strength. Adding Chromium gives the steel better hardness and melting temperature and adding Vanadium also increases hardness and makes the steel less prone to metal fatigue.

The percentage of additives also affects the properties of steel, for instance adding 11% chromium produces Stainless Steel as it inhibits corrosion. In order to produce high-quality tools, a form of steel known as High-Speed Steel (HSS) must be used, it is produced by adding Tungsten.

The base metal of steel is Iron, an abundant metal which has been mined and forged for many millennia, in fact, the oldest iron objects have been found in Egypt dating from 3500BC and were made from meteors. The first objects made using iron ore were produced around 3000BC in what is now Syria and northern Iraq. Steel itself was first produced in Turkey in around 1800BC

The steel known as Damascus Steel, also known as Wootz Steel, was produced in Sri Lanka around 600BC and reached its use in weapons reached it’s zenith in Damascus, Syria, from the fourth century up to the 18th century, when the technique was lost. It is said that when Alexander the Great conquered Persia, the king of Persia gifted him not with gold or silver but with 30 pounds of wootz steel, such was its importance.  Since then recovered examples of Damascus steel have shown the existence of carbon nanotubes within their structure, lending credence to the myth that it was the ultimate type of steel.

The Chinese of the Warring States period (403–221 BC) had quench-hardened steel,while Chinese of the Han dynasty (202 BC – 220 AD) created steel by melting together wrought iron with cast iron, gaining an ultimate product of a carbon-intermediate steel by the 1st century AD.

Since the 17th-century European steel production has used the smelting of iron ore into pig iron in a blast furnace. This process used charcoal but has been replaced by coke due to coke being more economical. In this process pig iron was refined in a finery forge to produce bar iron, which was then used in the steel making process.

The production of steel by the cementation process was first described in 1574 in Prague with production carried out in Nuremberg by 1601.

Crucible steel is simply steel which has been melted in a crucible rather than being forged., with the result being more homogeneous. The crucible steel method requires very high temperatures and was not introduced until the 1740s.

The modern era of steelmaking took off in 1855 with the introduction of Henry Bessemer’s Bessemer Process. His method let him produce cheap steel in large quantities using pig iron. The lead to the use of mild steel replacing wrought iron in various products. This process was improved further by removing the phosphorus using the Gilchrist-Thomas process.

All of these methods of steel production were succeeded by the Linz-Donawitz process of basic oxygen steelmaking (BOS), developed in the 1950s.

Carbon steel, which is composed of iron and carbon, makes up 90% of all steel production. Low alloy steel is alloyed with other additives, usually manganese, molybdenum, chromium, or nickel, in amounts of up to 10% by weight to improve the hardness of thick sections. High strength low alloy steel has small additions (usually < 2% by weight) of other elements, typically 1.5% manganese, to provide additional strength for a modest price increase.

The Corporate Average Fuel Economy (CAFE) regulations have given rise to a new type of steel, this is known as Advanced High Strength Steel (AHSS). This new steel is both strong and ductile, so that vehicle structures can maintain their current safety levels while using less material. There are a number of commercially available grades of AHSS, such as dual-phase steel, which is heat treated to contain both a ferritic and martensitic microstructure to produce formable, high strength steel.

Carbon Steels are often galvanized, through hot-dip or electroplating in zinc for protection against rust and other environmental hazards.

Modern examples of steels include tool steels, these are steels which are alloyed with large amounts of tungsten and cobalt or other elements to maximize solution hardening. These steels also allow the use of precipitation hardening, with improvements to the alloy’s temperature resistance. Tool steel is generally used in axes, drills, and other devices that need a sharp, long-lasting cutting edge. 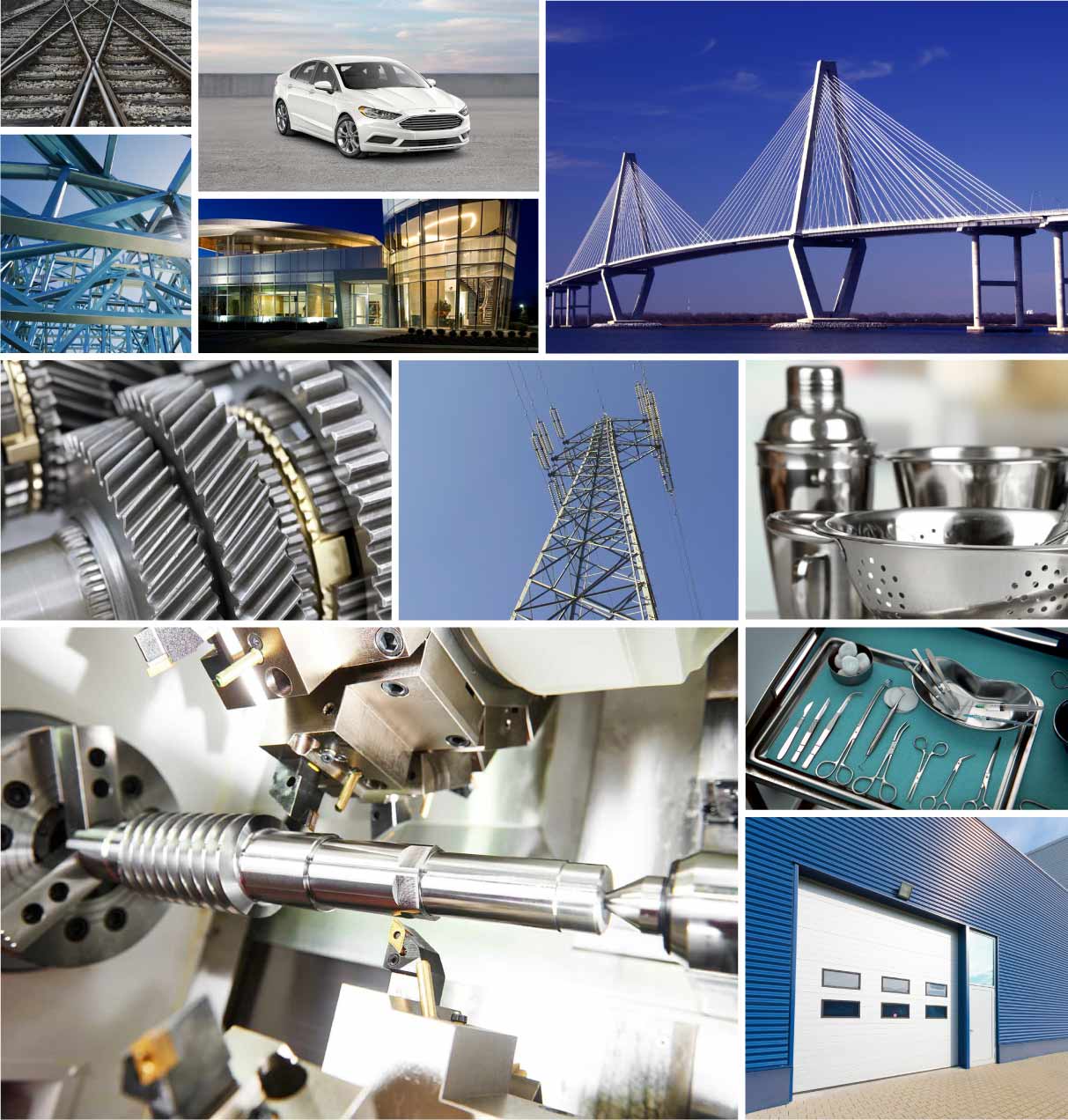 The uses of steel

Steel is used widely in the construction of roads, railways, appliances, and buildings. For instance, most large modern structures, such as stadiums and skyscrapers, bridges, and airports, are supported by a steel skeleton. Even those with a concrete structure employ steel for rebar.

Its use is widespread in major appliances and cars. Despite growth in usage of aluminum, it is still the main material for car bodies. Steel is used in a variety of other construction materials, such as bolts, nails, and screws and other household products and cooking utensils. Without its properties, it would be difficult to produce tools to shape objects with CNC and thus it affects pretty much everything produced one way or another.

Before the invention of the Bessemer Process, and other, modern, techniques, steel was still relatively expensive. Hence it’s used in objects where no cheaper alternative existed; the cutting edge of knives, swords, razors etc. Also in the making of clocks and watches and springs.

We hope you enjoyed reading our guide to steel, check out our other blog posts and if you have any questions then get in touch.

Get in touch today!

Complete the form, upload any files you need a quote on and click Send. All fields marked * are required. We’ll get back to you as soon as possible. Thank you.

You may have heard of Swiss machining but most people don’t have an understanding of it, that’s why this guide answers the most important Swiss Machining FAQs.

16 Secrets of the SR71 Blackbird

It’s the Secret Plane with secrets. Read this amazing article to discover the 16 secrets of the SR71 Blackbird, the plane that could outrun a missile.